Sage as a spice, tea and with healing, magical properties 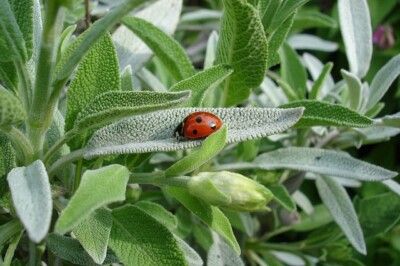 Sage and its many uses

Sage is a garden plant, which is present in almost every kitchen. Be it as a tea or as a spice. In addition to the well-known garden sage (Salvia officinalis), there are another eight to nine hundred species of sage.

The history of sage

The sage was already used in the earliest centuries. In Egypt they even gave it its own character. The plant stands for chastity and good health.

Linguistically Salvia comes from the Latin word “Salve”, which means: “Be healthy”!”.

In the later Middle Ages, at the time of the plague in 14. In the seventeenth century, the plant was, along with rosemary and others, one of the herbs that were burned and thus not only masked the stigma of death, but also acted as an air purifier disinfectant.

Always popular with herb women, it soon became one of the witch herbs.

The real sage can reach a growth height of up to 1.20 meters. The lower part of the plant lignifies over the years. Soft and felt-like feel of its leaves, which are quite elongated and narrow.

The purple flowers are in small groups and are beautiful to look at.

In the many centuries before us, before our era even, the sage as a medicinal plant was repeatedly mentioned and described by well-known doctors.

Now that doctors in the Middle Ages were also using them, in the 16. In the sixteenth century it was cultivated in monastic gardens and from there it passed into peasant gardens.

A saying that is still known today goes like this: “Cur moriatur homo, cui salvia crescit in horto?” – Let the man die, to whom sage grows in the garden?

The various uses of sage

Slowly, the real sage developed into a sacred herb.

Hieronymus Bock wrote in his “New Kreutterbuch” in 1539: “Among all perennials, hardly any plant is superior to sage, because it serves the doctor, the cook, the poor and the rich.”

In the field of health

In the following years, one discovered the antiperspirant properties of the herb, which was also gladly used by women in the climaterium.

The sage tea, but also the tincture helped with night sweats and became a sought-after herb.

The fragrance comes from the leaves of the plant. The glandular hairs contain the coveted essential oil.

But be careful, the real sage plant contains 40% thujone, which can have a harmful effect if taken in excess, and in a certain group of people even triggers epileptic seizures.

Today, the sage is still preferably used in tea. For gargling it is suitable, in order to work against mouth mucosa injuries or also gum inflammations.

Some chemotherapies cause the mucous membrane of the mouth to tear, where painful spots then appear. Rinse the mouth with sage tea helps to heal the injuries.

But gargling with sage tea also helps with sore throats and tonsillitis. For this 3-5 fresh leaves are poured over with hot water or 3-7 dried ones.

After ten minutes of infusion, the parts of the plant are strained off. When the tea has cooled down, gargling or rinsing can be started.

A popular herb is the real sage also in the cold season, where you add a little honey to the tea and drink sip by sip slowly.

Its medicinal substances help with typical ailments such as night sweats, sore throats and coughs.

In the garden is impossible to imagine without the sage. Its abundance in the different species also allow to produce the most diverse flavors. Sage leaves are best collected just before flowering.

The plant’s ingredients are richest then. In a warm, well-ventilated place, the leaves need about 10 days to dry.

It should be spread generously. Whole stems are tied together and hung upside down to dry.

Use as a spice

But not only as a medicinal plant, but also as a spice, the sage has found its way into kitchens.

The dried leaves are finely powdered and added to fish, poultry and lamb dishes to facilitate digestion. The taste of the dish becomes spicier by addition.

Also popular are the herbal pillows with sage, where dried leaves of the plant are put in a linen sachet.

The sage pillow can be warmed under a hot water bottle and then placed directly on the chest.

This can relieve asthmatic symptoms. Placed under the pillow, it can help with insomnia.

But if all this is not enough, you can also make a liqueur, tincture, wine, oil or vinegar from sage.

Baths, compresses, compresses, fresh herbal porridges, sage is used in so many ways that there are countless ways to encounter it.

In the magical field sage is a popular ingredient for incense. Here it helps to eliminate negative energies. White sage was often used in sweat lodge ceremonies.

It is one of the most powerful spiritual purifiers among plants and was therefore popular for use in blessings, prayers, meditations and rituals. It was given the name: “Holy smoke”.

Finally, a little legend about sage: when the king’s mother once had to flee with her son Herod, she passed a field with many plants. She begged and pleaded with them for help, but no one granted it to her.

When she passed by the sage, it bent to the side and gave her hopeful refuge. The dense leaves protected little Herod and his mother until the danger from the pursuers was over.

The mother was so grateful that she spoke to the sage: “From today until forever, you sage will be everyone’s favorite plant. You will have the power to heal them, to save them from death, just as you did with me.”

Since then, sage has become a well-known medicinal plant with more healing properties than those listed here in the report.

© by Haideé Zindler
From the books:
“What not only herb witches should know”
“The magic of incense”
“Healing tea from the realm of the primordial plant world”